PlayStation VR launches on October 13th, but today is review day and we’ve got a detailed PSVR review ready for you! For those who don’t want to dig into the full review, here’s our handy summary. For the rest of you, we’ve got 2,000 words awaiting your eyes. 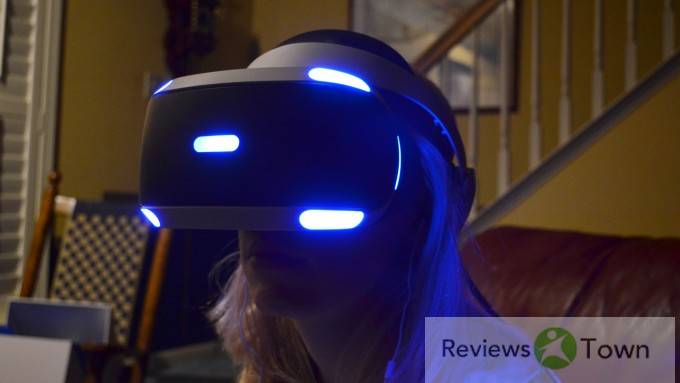 PlayStation VR is a strong start for virtual reality on consoles, showing that it not only can be done, but it can be done well; the system is home to some of the best VR content I’ve played yet.

Powered by the now three year old foundation of PS4, I’m blown away by the visuals that have been achieved through PSVR. I’m especially interested to see how things improve further with the launch of PS4 Pro.

PSVR’s 1920×1080 OLED panel resolution might be lower on paper than the headset’s two major competitors, but with its RGB pixel structure, it’s perfectly capable of creating powerfully immersive experiences and beautiful virtual worlds, despite a few display flaws.

The ergonomics of PlayStation VR feel class-leading in many ways when compared to the Rift and Vive, with a design that maximizes both field of view and comfort. However, I really would have liked to see built-in headphones to eliminate an extra cable, not to mention bulk, from a pair of headphones not designed to be worn with a VR headset.

PSVR’s visible-light camera-based tracking system is likely to be its biggest challenge going forward. It feels only just over the ‘good enough’ line and is notably less accurate and responsive compared to the more expensive Rift and Vive.

By no surprise and no mistake, PlayStation VR is in a big way all about the price. Consoles have always been about value. And despite being based on demonstrably less powerful hardware, PSVR delivers a VR experience that punches above its weight class and makes a strong argument for both existing and new console players to jump into VR right now. 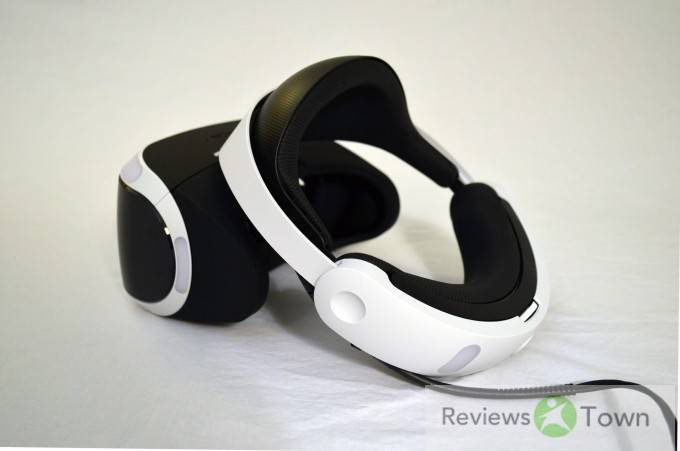 Sony’s years of hardware design experience shines through on PlayStation VR. Right out of the gate back when the company announced (the formerly named) Project Morpheus, the headset’s ergonomic design was already matured very close to what you’ll get out of the retail box. It’s an elegant design that feels more sophisticated than the Vive and more ergonomic than the Rift. That elegance may however lead to some fragility however. 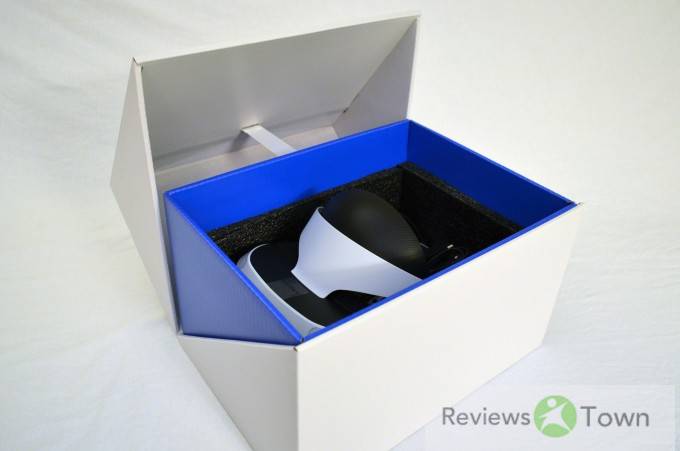 Unboxing the PlayStation VR ‘core’ headset (the package without the camera and Move controllers) was a fun experience. The outer box design mimics that of PlayStation’s overall playful branding, but slides away to reveal a strong inner cardboard box that’s thoughtfully designed around the elegant headset within. From the minimal grey exterior to the blue interior and and the diagonally-opening lid held in place with a white ribbon, Sony is conveying a sense of uniqueness to what’s inside, and for many people who are opening what’s ostensibly a $400 or $500 peripheral (depending upon which package was purchased), it certainly should feel special.

After cracking the diagonal shell open, players are greeted with a series of smaller boxes which contain cables aplenty. All are removed easily with finger holes, and reveal the pearl within the box, the PSVR headset itself. There’s a surprising number of cables and bits in the box, but most of it is in service with connecting the PSVR’s breakout box to the PS4; fear not, only a single cable will run away from the breakout box to the headset, and setup is actually pretty painless (more on that later).

For what will be the first VR headset for many people, I think Sony did a good job with a memorable unboxing experience, and that inner box will serve as a good storage place for the headset and an occasional transport box (though for more substantial transit there’s more robust options). 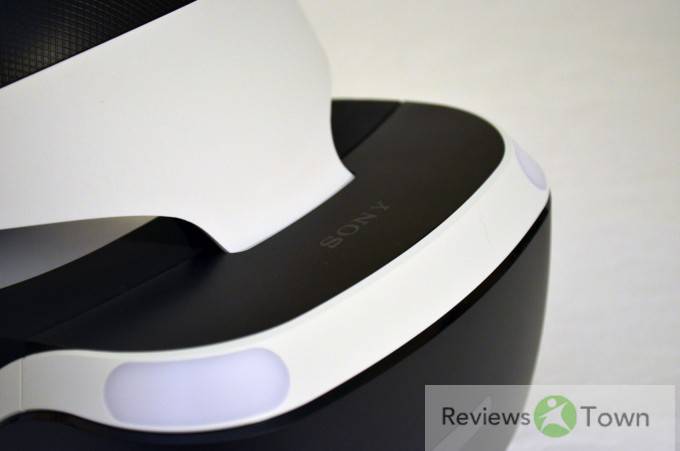 Plastic is the predominant material found on the headset, and while it’s elegantly designed, it doesn’t have quite the premium feel of the Rifts svelte fabrics or the firm feel of the Vive. The overall impression the PSVR leaves is of greater fragility than it’s PC powered counterparts.

Part of that has to do with the materials, but a larger part is likely due to the design of the headset which has a fairly large display assembly connected by a relatively small mounting strut. With the leverage provided by the display assembly, there’s some flex to PSVR’s overall shape. This may have been a necessary sacrifice in order to have the comfort of a hanging-style design that’s also highly adjustable (which we’ll talk more about later).

Generally speaking, you’re unlikely to feel comfortable tossing PlayStation VR around like you might one of the PS4 controllers, but then again, neither of the other major headsets out there feel quite ready for that level of handling either. 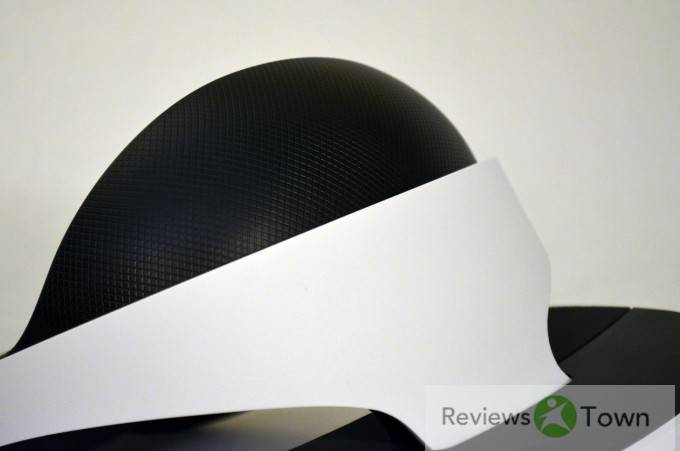 The inner padding of the headset that rests on your forehead and squeezed behind your head is squishy and comfortable, providing a lot of wiggle room when it comes to tightening the headset your comfort. 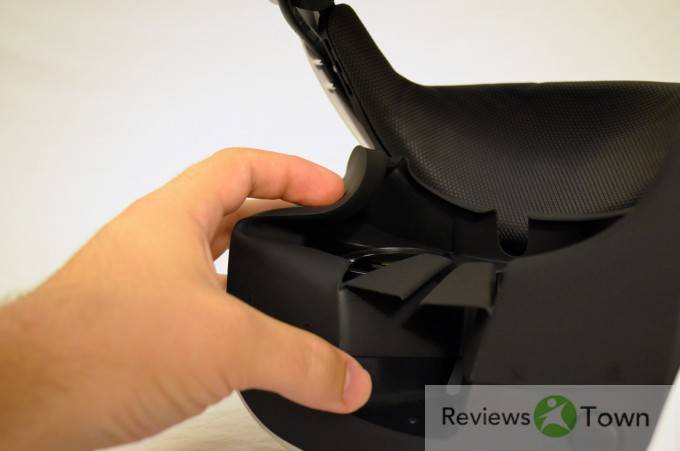 Because the display assembly doesn’t rely on resting against your face like the Rift and Vive, the shielding around the lenses is made of a lightweight and highly flexible rubber that will quite easily defer to the frame of a pair of glasses, making PSVR potentially the most glasses-friendly high-end VR headset out there. 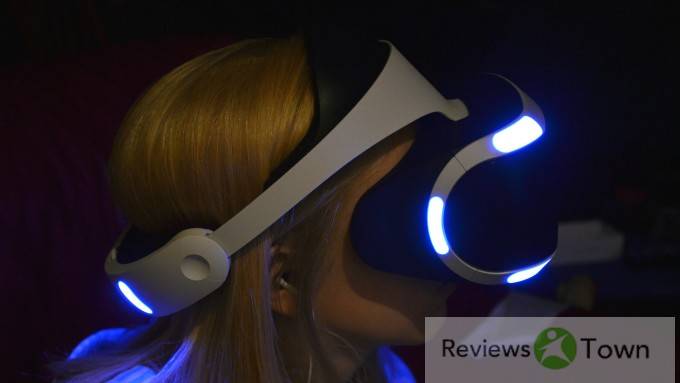 As I wrote previously, I think PlayStation VR stands among the most comfortable headsets out there. The ‘hang-down’ design of the very different than what the Vive and Rift bring to the table, and the result is a headset that puts almost no pressure on the sensitive muscles in your face. I explored the differences in head-mount approach between the three systems:

At 470 grams, the Rift relies on a semi-rigid strut and strap system that grips the crown of your head, to which it transfers much of the display enclosure’s weight via a strap running over the top of your head. The display enclosure then rests somewhat on your brow, with just a bit of pressure on your cheeks (when properly adjusted).

At 555 grams, the Vive takes a straightforward goggle-style approach (much like the Rift development kits) where flexible straps are pulled tightly to squeeze the unit against your face with force applied from the back of your head. Like ski goggles, the pressure from the headset is felt largely in the brow and cheek areas surrounding your eyes.

Both the Rift and Vive end up putting a fair amount of pressure on your face. This isn’t ideal as the face is filled with muscles that like to move, especially in the cheeks and around the eyes. They don’t quite like bearing pressure either; poor placement of a headset on your face can hold the muscles in non-resting positions which is notably uncomfortable, sometimes leading to twitching. If you’ve ever squinted or opened your eyes widely while putting on one of these headsets, you’ll immediately notice the discomfort of having the muscles in your face unable to reach their natural resting position. 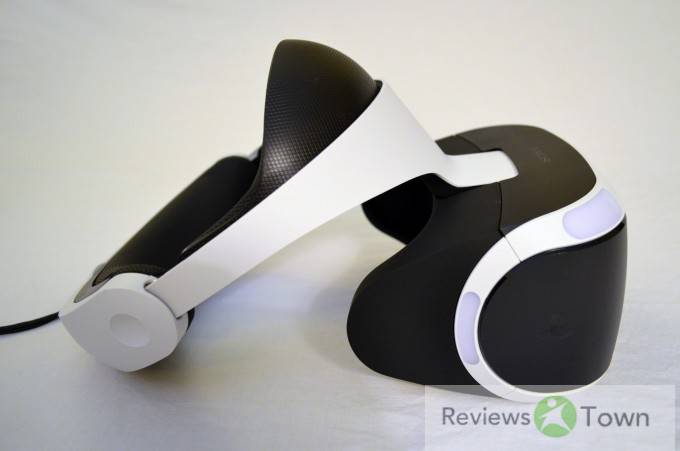 Sony’s approach is very different. PlayStation VR uses a ‘hanging’ style display enclosure which doesn’t rely at all on pressure from your face to keep it in place. Instead, the display hangs down from the structure of the headset while transferring a great majority of the weight to the top of your forehead (which, if you poke around up there a bit, you’ll notice has very little muscle compared to your face). From your forehead, the circle of the headset’s body wraps low behind your head to act as an anchor for the forehead section. 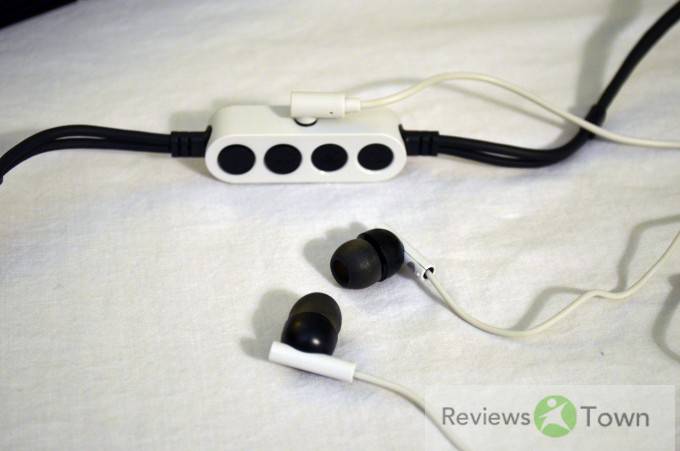 Sony opted to go with a ‘Bring Your Own Headphones’ approach, and they include a pair of inexpensive earbuds with PSVR. Headphones can be attached via a 3.5mm port on the side of the inline ‘remote’ that sits along the headset’s cord. The PlayStation VR breakout box spits out spatial 3D audio to whatever headphones you plug in there.

The included earbuds didn’t fit me very well initially, but there’s a pair of smaller and larger rubber tips that you should try on for size before giving up on the earbuds all together. I took the the smaller size and have mostly enjoyed using the earbuds rather than adding the additional weight and bulk of a pair of over-ear headphones.

No matter which approach I took, I was still left itching for an integrated headphone solution like those found on the Rift. Dealing with an extra headphone cable is already bothersome, but so too is fiddling with the headphones to find the right/left while the headset is already on. For those with expensive headphones of your own that you’d like to employ with PSVR, I’ll remind you that the Rift’s headphones are removable for that purpose as well, giving us a good model for how audio on a VR headset should be done. 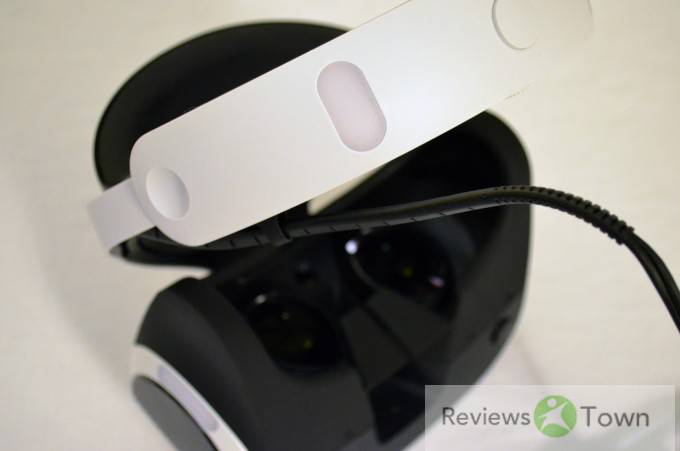 Placement of both the cable coming out of the headset and the inline remote seems off to me.

The cable mounting for PSVR’s tether points it out behind the headset, but I found it more comfortable to let the cable run in front of my shoulder and straight toward its home near the PS4 in front of me rather than behind my shoulder. 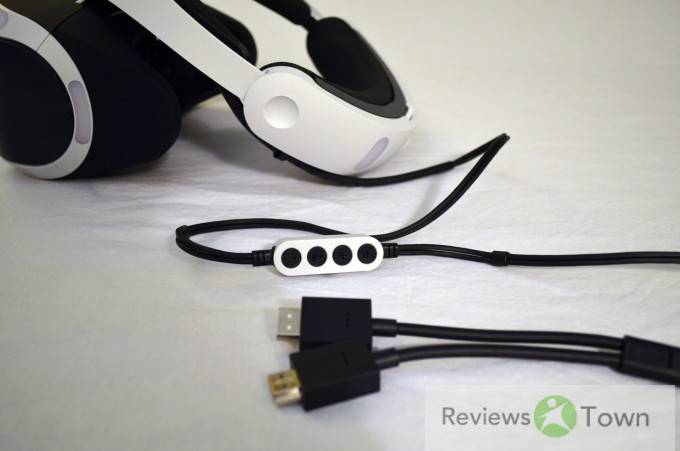 The inline remote—which houses a power button, volume buttons, and the headphone jack—seems placed at a very odd length down the cable; it seemed to like to rest around the height of my chest which made it awkward to grab and manipulate. Placing it longer down the cable (maybe around waist-height) seems like it would make it easier to use. It’s likely that Sony wanted it fairly close to the head to try to minimize the distance between the headphone jack and the player’s ears, but that’s just one more point in favor of going with the built-in headphone approach.