Both the Samsung Gear Fit2 and Fitbit Charge 2 are well rounded fitness trackers with a few flaws sprinkled in here and there. The first Gear Fit was beastly and lacked a few needed features, which the newer Fit2 has greatly improved on. The same can be said for the updated Charge.

That’s why it’s a difficult decision choosing one over the other. But when it comes down to it, there can only be one – unless you’re cool with wearing a tracker on each wrist. Based on overall design, features, battery life and of course, price, this is how Samsung’s device stacks up against Fitbit’s. 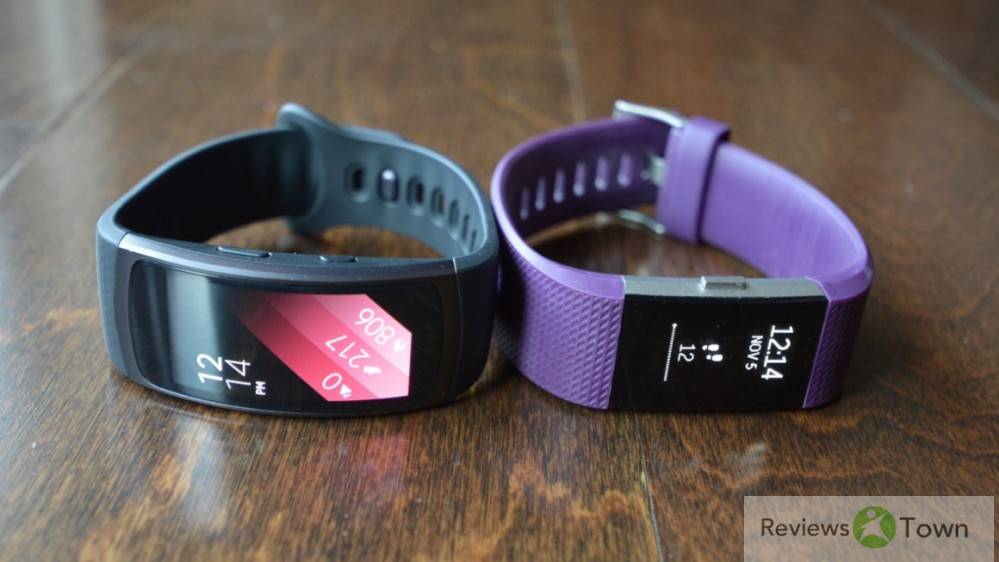 The Charge 2 and Gear Fit2 have a similar sporty design but the Samsung tracker has a noticeably larger AMOLED screen. This helps with the vibrant colors and touchscreen which isn’t found on the Fitbit. Rather, the Charge 2 has a black and white OLED screen and uses a tapping feature instead of a touchscreen. You’ll also rely on the side buttons of both devices to navigate the interface.

The Gear Fit2 sits more flush and better curves with your wrist making it a bit more comfortable than the Charge 2. Both remain light and unobtrusive with bands that are easy to put on and take off.

You get a few more strap options with the Charge 2. Fitbit’s offered up a surprisingly large amount of colors and materials to choose from including four Classic colors, along with the pricier special edition colors and leather bands. Samsung gives you the choice between three textured straps and sizes.

Overall, the Charge 2 is easily the more fashionable option which makes sense considering Fitbit’s made a lot of noise about leaning heavily towards style. Still, Gear Fit2 provides a hybrid experience with its touchscreen feature that you can’t find on many fitness trackers – and it does it well too thanks to Samsung’s infallibly bright screens.

It should be noted that neither are fully waterproof and should be taken off when showering. The Gear is IP68 rated which means it can handle some water (1.5 meters for 30 minutes) but definitely isn’t for swimming.

The activity tracking on both devices starts off pretty standard. You get the usual step, sleep, calories and even stair tracking. Both are also equipped to auto-track various activities like running, weights, elliptical, cycling and much more.

Testing has found similar results across the board though the Charge 2 tended to overestimate steps while the Gear Fit2 was able to log three out of seven jogs automatically. However it should be noted that the Gear has consistently auto-tracked brisk walks, turning on various tracking metrics without needing prompts.

Charge 2, on the other hand, is able to measure your VO2 Max which nearly puts it on the same page as fitness enthusiast brands Garmin and Polar. Wearing your Charge 2 to sleep to ensures the tracker measures your resting heart rate which it then pairs with your user profile to provide a score. This number is matched up against other people in your age group and gender and is displayed in a nice little bar chart to show fat burn, cardio and peak heart rate zones. 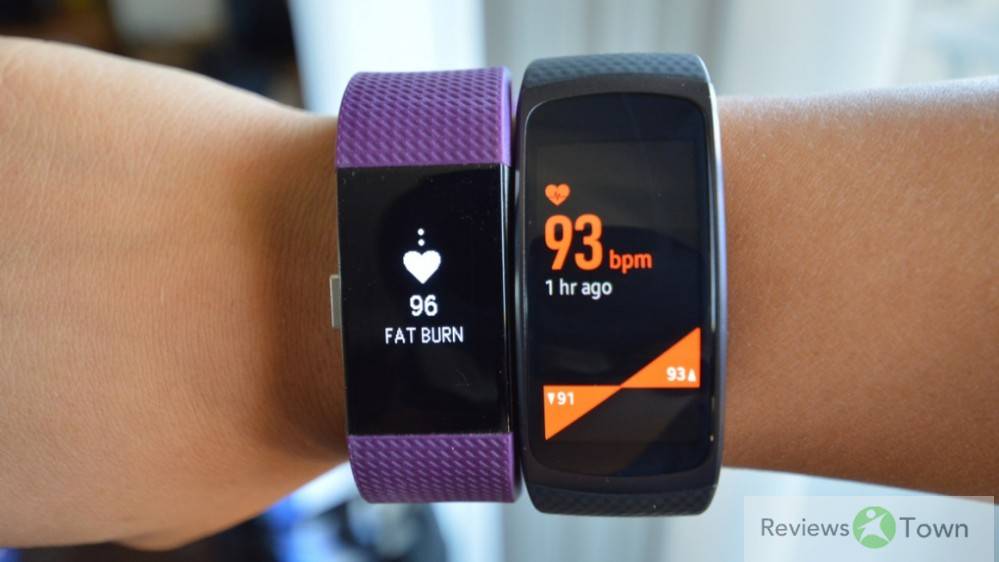 Both fitness trackers are equipped with heart rate monitors that are generally accurate when compared to chest straps and other HR wearables, so long as you aren’t doing intense exercises. If you are, it’s a different story.

Charge 2 on long steady runs tracked well but the sensor took about 10 minutes to lock on compared to a chest strap. During HIIT workouts there were a few problems with lag time and it wasn’t able to keep up with anything higher than 115 – but this is apparently a bug that Fitbit is working on.

Gear Fit2 has its own heart rate woes and during strenuous workouts can be off by 20bpm, but resting measurements remain steady.

GPS is also available on both trackers but there’s a caveat for Charge 2. Specifically, you’ll need your phone to use its GPS functions since Fitbit’s stuck on ConnectedGPS. Samsung has equipped the Fit2 with standalone GPS but it’s not the quickest software since there’s no GLONASS to track you. However, it’s still better than needing to carry around another device with you.

In the heart rate category, it seems the trackers are tied. Overall, neither can really handle the stresses of high intensity workouts – which makes sense since they’ve been built for moderate users and not enthusiasts. On the GPS front, Samsung is the clear winner with its built-in tech.

The Gear Fit2 is basically a smartwatch. That means you’ll get your pick of notifications including text, calls, email, third party apps and calendar alerts. There’s limited functionality in how you can respond, but it’s still more than what the Fitbit Charge 2 can do.

In fact, Charge 2 isn’t really a smartwatch and you’ll only get calls and clipped texts on the wrist. There’s also no way to respond – that’s up to your smartphone.

As for other features, the Gear Fit2 will play Spotify and music stored directly on the device while Charge 2 gives you guided breathing exercises to de-stress.

Fitbit also has Adventures set up in its Challenges section of the app. It’s an extra little bit of fun that incorporates a kind of augmented reality into your daily step counting activity. Samsung has Together which lets you compete with friends on leaderboards, and is available through the app and the Fit2 tracker.

Both devices also employ ways to get your sluggish butt moving. Charge 2 will buzz you reminders to take 250 steps before the hour is up while Fit2 will let you know you’ve been inactive for a certain amount of time – and that you need to move.

In general, the feature set is pretty similar across the board. However if you want a slightly more robust notification system, the Gear Fit2 is the better option. 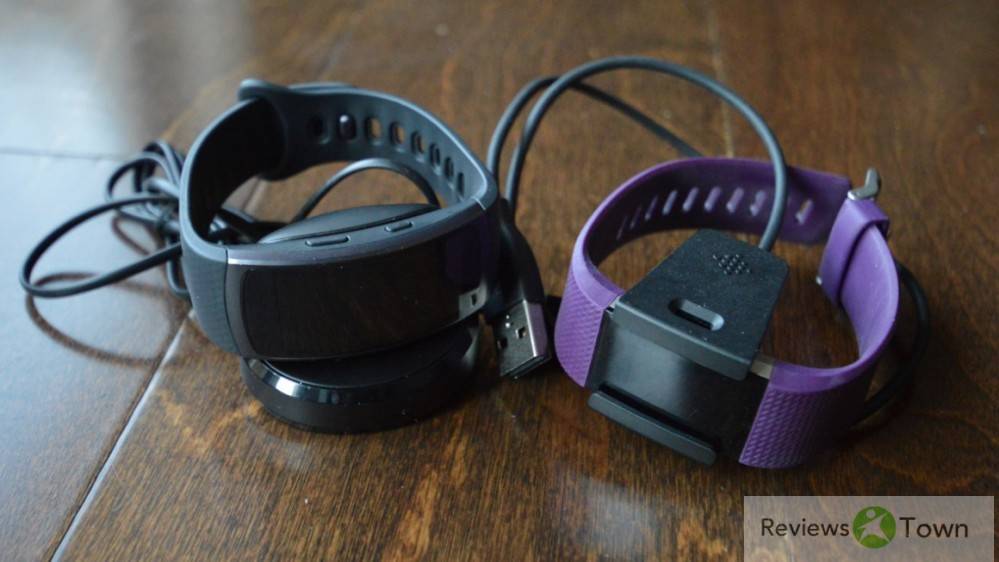 According to Samsung, the Gear Fit2’s 200 mAh battery should last up to three to four days, or five if you’re generous with usage. Meanwhile Fitbit says the Charge 2 battery will last up to five days, again depending on use.

During our testing, the Gear managed two days with all notifications turned on (but we expect around half a day more or even three). Charge 2 lasted much longer at six days but it also doesn’t have a color touchscreen nor does it supply you with that many notifications. At most, you’ll get calls and texts plus reminders to move. Regardless, Charge 2’s battery will require less time on the nightstand.

The Gear Fit2 costs $179.99 while the Charge 2 is cheaper at $149.99. But you have to remember, Samsung is giving you a color touchscreen and a smartwatch/fitness tracker hybrid experience. Meaning paying $30 extra shouldn’t be a dealbreaker if that’s what you’re looking for.

Compatibility should also be factored in here when comparing prices. The Charge 2 is the more well rounded device with its cross-platform support. That means you should get the same experience on both Android and iOS. Gear Fit2 however can only sync up with handsets running Android 4.4 and above, leaving iPhone users in the dust.

There’s no clear winner in this versus but it seems Fitbit Charge 2 may be the best option for its features and cross platform compatibility. Adding on VO2 Max and even guided breathing gives it a slight edge over the competition, even if it’s not perfect for the most active users. Gear Fit2 is still a solid device in its own right if you want a hybrid fitness tracker, but it’s sorely limited to Android smartphones. Maybe next time, Samsung.