Okay, getting Alexa to finish song lyrics might not be the primary purpose of the Dot, but to be honest I’m already talking to her much more than I do to Siri – which I have on me at all times of the day. She might not quite be HAL 9000, but Amazon’s Alexa often gives me the feeling of having the AI assistant I’ve always wanted. While I generally find voice assistants to be a nice extra feature (when they work), I find Alexa actually useful.

The Echo Dot is a scaled-down, but functionally similar, version of the Amazon Echo tower. This is now the second iteration of the Dot – the first was extremely short-lived – it’s slightly smaller and comes with a few other design changes peppered in, but is more or less the same experience. The Dot will make your home smarter. It isn’t going to change the temperature or dim the lights, but it will talk to the things that do. The more smart devices you have around the house, the more useful the Dot becomes. While you can purchase individual Dots for $50 each (that’s $40 less than the original), Amazon also sells them in packs of six or twelve, which come with a slight discount. Amazon wants you to fill your house with Alexa, and smarter homes will probably benefit from having more than one Dot scattered around the house. They’re unobtrusive enough but, like me, you’ll probably find that the Dot quickly “disappears” behind Alexa herself. 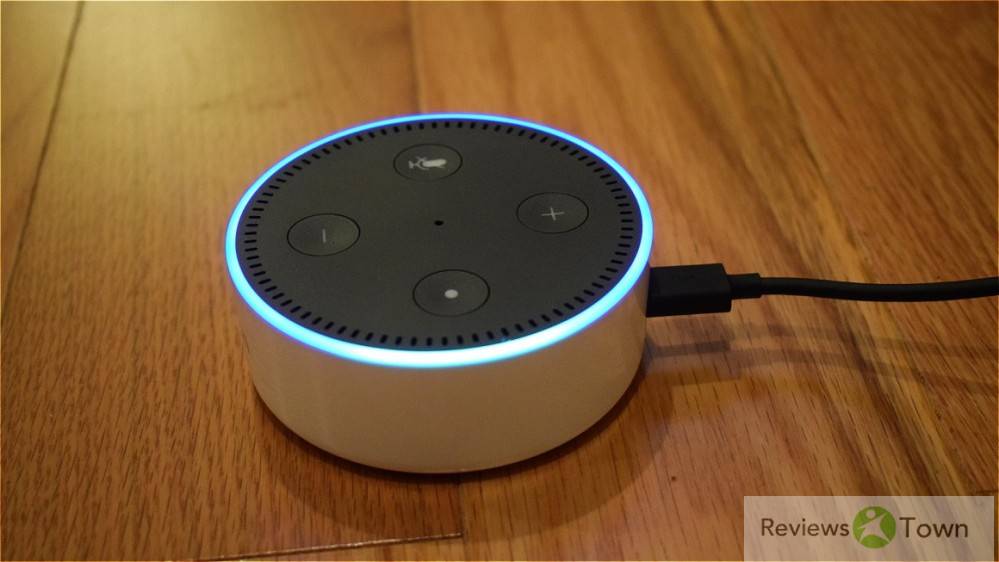 “Alexa, is it going to rain today?”

The Echo Dot is about 1.3 inches tall, slightly shorter than the previous model, but still a fraction of the height of the full-sized Echo. Being that much smaller helps it sneak onto a bookshelf or under a TV with greater ease. It’s very light, though that probably won’t matter as you’re not going to be picking the Dot up very often; it’s the type of gadget that finds a spot in your home and stays there.

The Dot also now comes in a glossy finish, while the larger first-gen model had a matte skin. On the top are four buttons, two of which are for volume, one for actions, and one for muting the microphone. I find I mostly change the volume using either my voice or via the Spotify app on my phone if I’m streaming music, but the mute button is more useful if you don’t want Alexa accidentally waking up.

I find this rarely happens, and the need to start most commands with by calling Alexa’s name means it’s unlikely for her to mistake you. But you may also sometimes just want to not feel like someone’s listening to your conversations.

You’ll know when Alexa is listening or speaking by the ring of blue light around the top, which dances about when processing a request, but otherwise remains off. Also around the top is the speaker, but this is the Dot’s disadvantage to the full-fat Echo which provides better sound.

The speaker on the Dot is fine for hearing Alexa, but when it comes to playing music – one of the Dot’s best functions – you want to hook it up to something with better sound. You can do this through the auxiliary port, or just connect it via Bluetooth. Alexa’s voice will come through the speaker too, and I now keep the Dot hooked up to a speaker at all times.

The Dot has to be plugged in to function, which might seem odd, but then you’re not going to be moving it around. Having a rechargeable battery would only make for one more thing to worry about, so having a cord makes sense, although it obviously limits where Alexa can be placed. 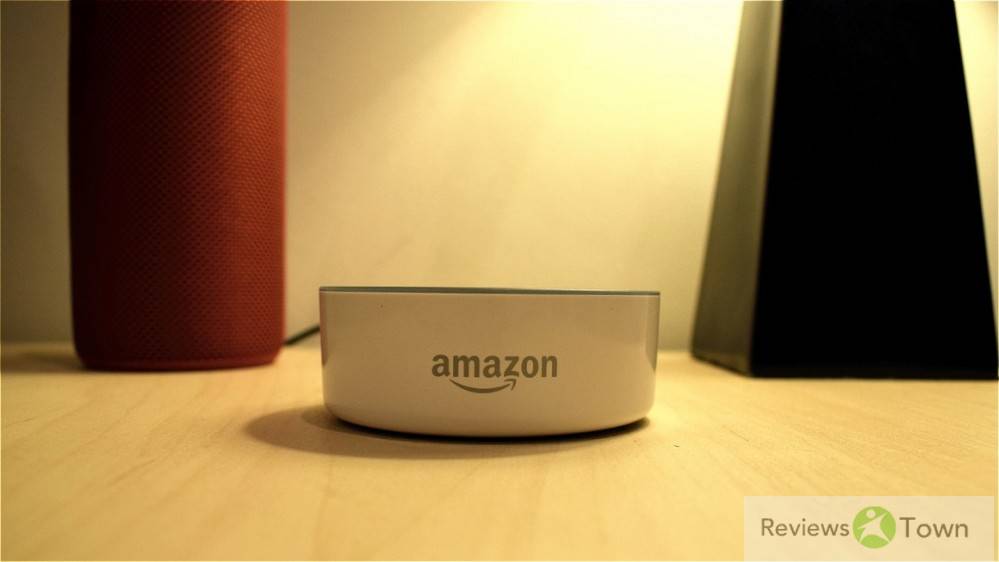 You’ll notice that every sentence begins with “Alexa”. Unlike Google’s Assistant or Oakley’s Radar Pace AI, Alexa isn’t contextual to the rest of the conversation. She’ll draw on all her resources to answer your questions and perform your requests, but every function is in isolation.

What I like about the Dot is that I don’t usually have to raise my voice to speak to Alexa. If music is playing then I find myself needing to speak a tad louder, but overall I find that it picks up my voice without trouble. Accuracy of the voice commands is a different matter, although decent for the most part. Amazon suggest you place the Dot somewhere the microphone is going to be unobstructed, which means tucking it out of sight might create problems with pickup. I keep mine on a table next to the couch, and while I’m rarely right next to it, it doesn’t have a problem finding my voice.

I’ve found Alexa pretty accurate with my commands, but there have been instances where she’s fallen down with certain word combinations. Alexa does, however, improve over time, and there are two ways this happens. When you go into the app you’ll see a list of all the commands you’ve ever given Alexa, and on each one you can note whether she was accurate or not. Second, there’s a voice training feature, although that’s only on the US version of the app right now. I’m not sure why it’s not on the UK version, but as Echo is only just arriving there, I imagine it will appear shortly. Voice training gets you to speak out a series of sentences that Alexa can calibrate herself to, but it’s good to keep noting when Alexa gets things wrong for long-term improvements.

So, what can you actually ask Alexa? If you already own an Echo or have read our previous Echo review, everything here is the same. Alexa is designed to be your personal assistant for the home: she can operate smart devices, provide you with information about the news or weather, she can stream music, or even hail you an Uber. Many of her abilities come from Skills, the name given to the smart functions you can browse and download in the app. There are thousands of these already to choose from, although available Skills differ between the US and UK.

But Alexa also has the internet’s wealth of knowledge at her disposal, meaning you can ask her anything from “Alexa, what’s the capital of Yugoslavia?” to “What’s the population of Canada?” to “What’s the IMDB rating for Paul Blart: Mall Cop?”

One problem I came across with the Dot was what happens when you have multiple units in close proximity. My housemate has an Echo in his bedroom, and when speaking to the Dot in the living room, I sometimes had them both talking back to me. Amazon has now released a fix for this, which it calls Echo Spatial Perception, and it’s just started rolling out to second-generation devices. When installed, it makes Echo better at working out the proximity of your voice to each device, so it knows which to respond with. 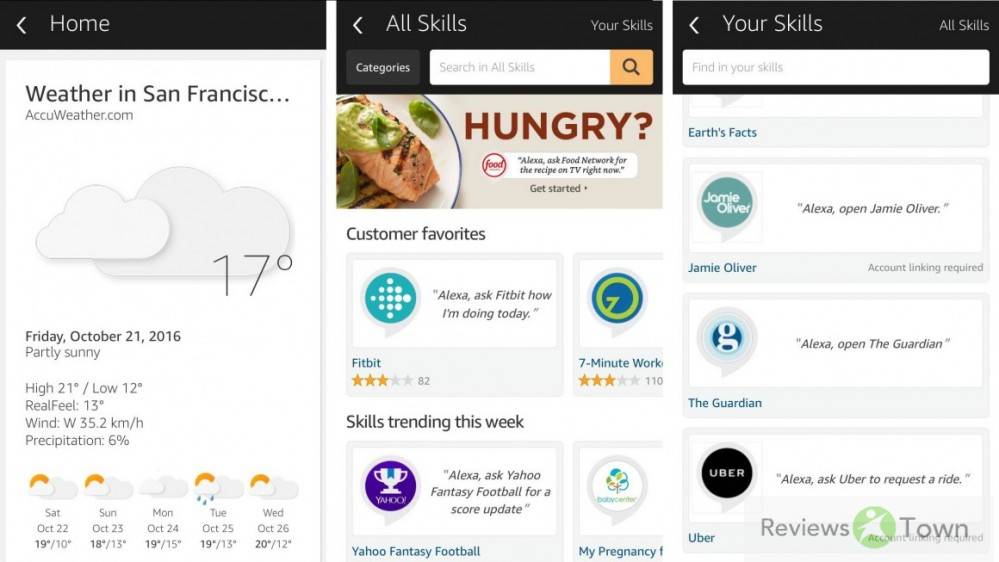 Setting up the Dot is a straightforward procedure, and the app makes it easy to adjoin services, Skills and smart home devices to Alexa’s neural pathways. From start to finish, the time it takes to complete the setup will depend on how much you want your Dot to do, but I had Alexa singing in under 15 minutes. You’ll foremost need an Amazon account to use Alexa at all, but you can connect to plenty of services outside of the Amazon ecosystem too.

There’s something I’ll suggest at this point, even though it’s something Echo users will be aware of: make sure you know how your voice purchasing is set up. This is a feature of the Echo where you can ask Alexa to find items on Amazon and instantly buy them. Alexa will read out the name of the product before asking you if you want to make a purchase, and if you say yes she’ll make the order. Now, I had a bad experience with this where Alexa misinterpreted a command for “yes” and placed an order, despite me proceeding to yell “No, no, damn it Alexa” at the coffee table.

Fortunately Amazon makes it easy to cancel an order, but just be vigilant should you have any kids around the house who might see an opportunity to turn Alexa into their personal Santa Claus. It can be a useful feature if you buy a lot of things from Amazon, but you may be better off adding a passcode in the app, which will have to be said aloud before any purchase goes through; or you can turn off voice purchasing altogether.

Once the Dot is connected to your Wi-Fi and devices, it can function without the smartphone, but you’ll need to use the app to add new Skills, change Alexa’s functions, and to improve voice accuracy. The problem is that the app isn’t always reliable. Sometimes I’ve had it stuck on its loading screen, and on a few occasions I’ve had it just crash entirely, which really breaks down the whole “smart” experience. I wouldn’t say it’s common, but it’s frustrating when it does happen. 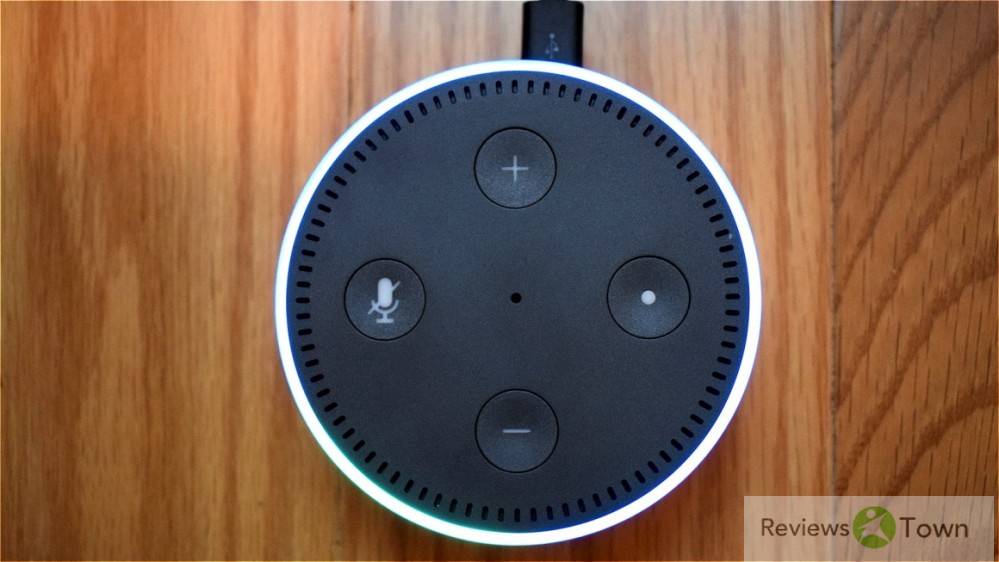 Think of Skills like IFTT recipes – in fact, there’s an IFTT Skill you can download. The type of functions Skills perform varies, with thousands of them already available and more being added all the time.

You can use Alexa to find good recipes, read stories from your favourite newspapers, ask Fitbit for an update, dim your Philips Hue lights, or even hail an Uber. Some are more useful than others. I’d argue that the ‘Sushi Facts’ app, which, yes, delivers tidbits about sushi on demand, probably isn’t going to get as much use as The Guardian’s, but hey, if that’s your thing, Alexa won’t complain.

Over time you’ll find which Skills are useful and which are superfluous. One of my favourite Skills is Flash Briefing, which comes pre-installed and delivers recorded snippets from news broadcasts of your choice. It’s quicker than turning on the TV, and delivers bite-sized news at any moment you ask for it.

Skills are what separate, and will continue to separate, Amazon’s smart home devices from Google, Apple and others, and with Echo now hitting the UK alongside the second-gen rollout, it will be interesting to see how much better Echo gets. Even though Google Home is just around the corner, I think it’s going to have to pick up some serious pace to catch Amazon’s lead.