You’ve bought the latest Apple Watch Series 2, set your watch face, downloaded the best Apple Watch apps and even uploaded music to your wrist. Now it’s time to have a bit of fun and load up some time-killing games.

A smartwatch might not be the first platform you think of when you consider even casual gaming, but thanks to a host of sensors, touch screen and flick-of-the-wrist accessibility, the Apple Watch actually makes for an interesting platform – as long as you don’t expect to be playing the next Call of Duty on your wrist.

Whether you’re waiting in the queue to pay for your McDonalds using Apple Pay, or catching a breather after that strenuous workout, here is our roundup of the best Apple Watch games that you can play right now.

Fans of Final Fantasy‘s developer Square Enix will find the price of this game totally worth it. This roleplaying, time traveling title lets you play with little oversight though you can jump in at various moments for monster battles and boss fights. You’ll get stronger over time and gain new abilities all with plenty of fun, neon graphics to enjoy. 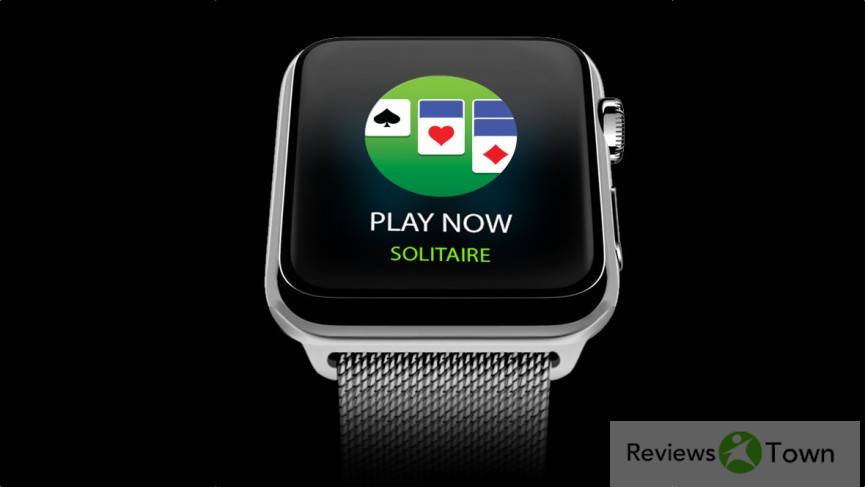 The classic card game can now be played on an Apple Watch. There are even extras like Daily Challenges which let you earn crowns for trophies. It’s much like the Windows version, just with added portability! 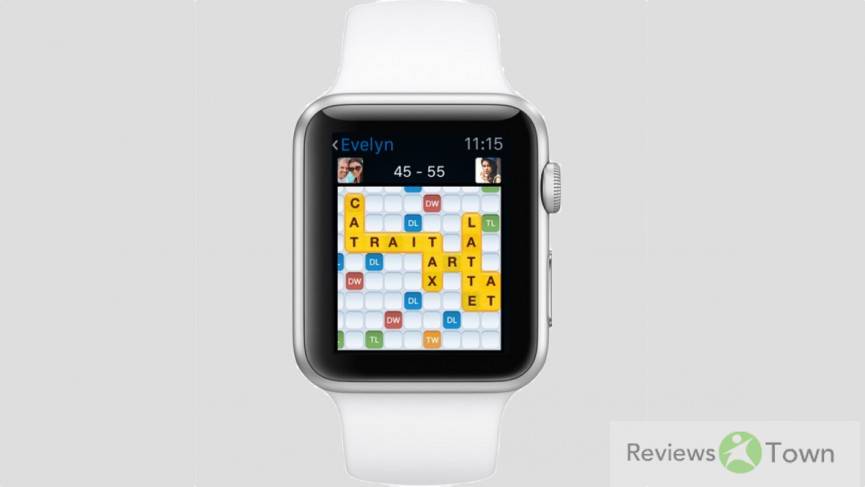 This game’s been a hit on mobile devices and now you can spell from the wrist too. Players can now track live games, view game boards to strategize their next move and chat with in-game opponents right from an Apple Watch. Using Glances on the Apple Watch, you can swipe to see how many moves you have left, view notifications and pending chats, and access the Word of The Day. 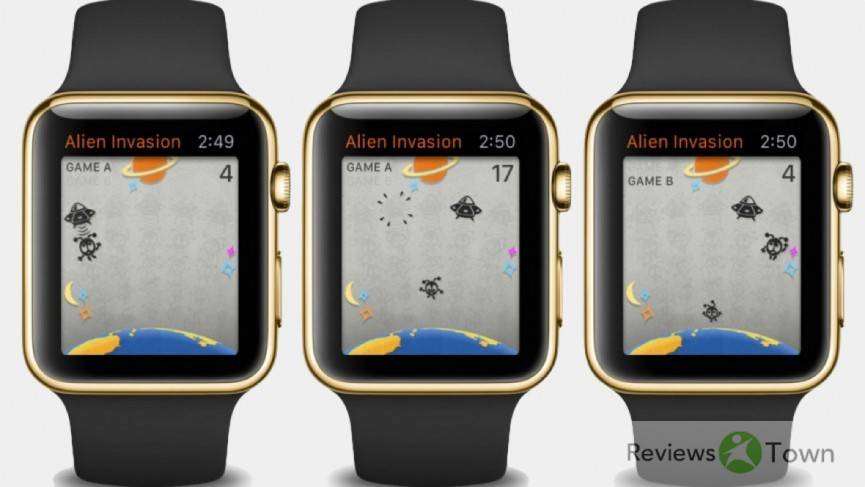 A retro special here, Alien Invasion, a fast paced arcade game by Light Pillar is inspired by the Nintendo Game and Watch games from the 80s. You’re an alien commander tasked with saving your troops before they explode, standard stuff but hella fun. The graphics will take you back. Select from two game modes via the iPhone app and compare best scores with your mates. 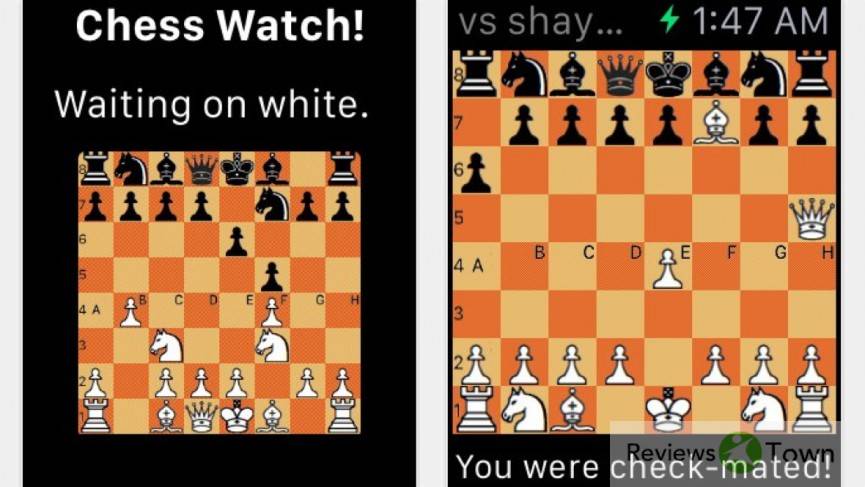 Don’t mess with the classics. But if you do, mess right. Chess Watch! lets you play chess against other online players from your Apple Watch. Via voice controls. “Queen to…, knight to…You were check-mated etc’ This is the wonderful world we live in! And you can live it now. 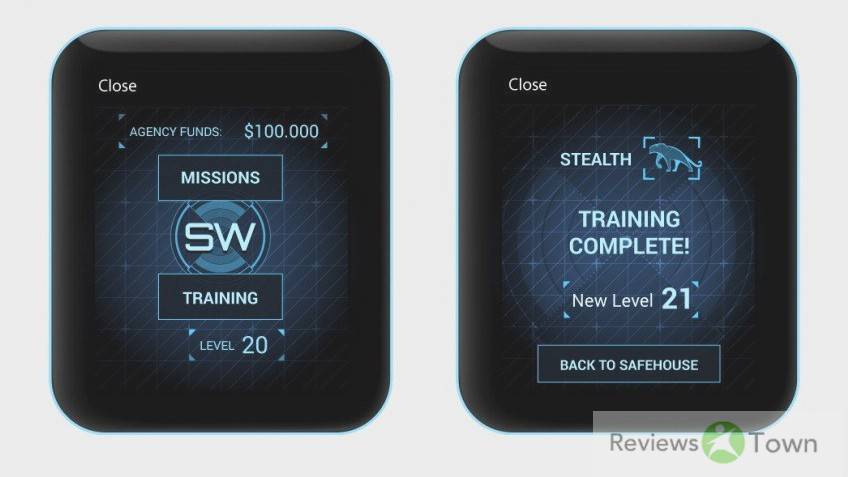 If part of the appeal of smartwatch ownership was becoming your very own secret agent, then you’ll get half way there with Spy_Watch; a game from Bossa Studios – the creators of indie classics Surgeon Simulator and I am Bread. Whilst you may be tasked with the role of spy handler rather than the agent themselves, this real-time text adventure tasks you with setting the rookie spy’s missions and issuing instructions throughout the day. 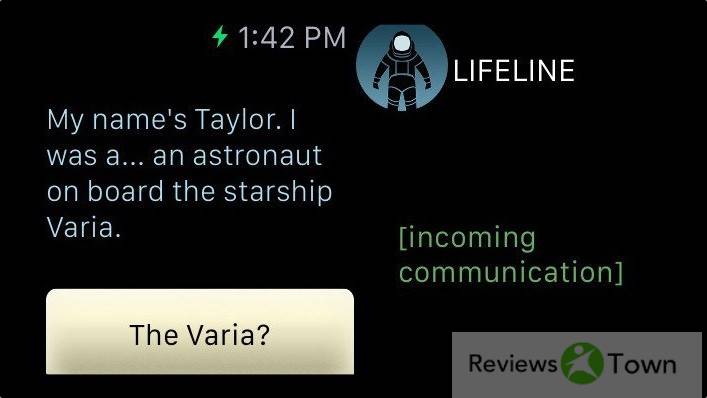 Continuing in the vein of text-based adventure comes Lifeline, a story crafted by Dave Justus of Fables: The Wolf Among Us fame. The story plays out in real-time, enthralling you with the survival tale of an astronaut stranded on an alien planet. The astronaut – named Taylor – relies on your interaction to help him make decisions that will ultimately lead to many possible outcomes. If you fail to respond to his calls for help (delivered by the Apple Watch’s notification system), Taylor might not live long without you… 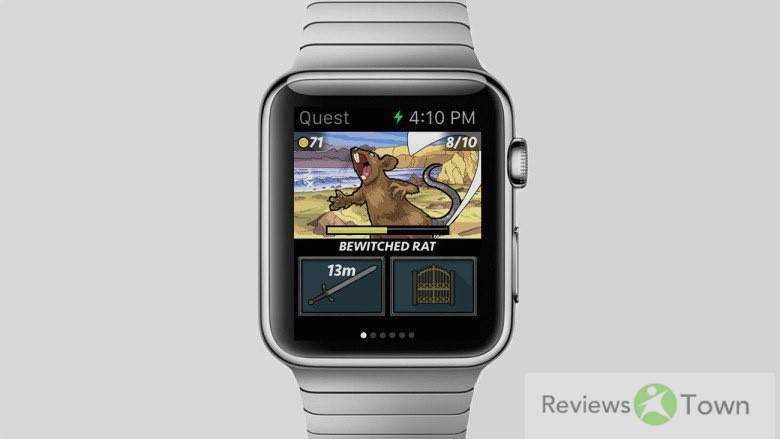 You might think that fitting a full-on fantasy RPG into the diminutive screen of a smartwatch wouldn’t make for the easiest of games to get along with, but surprisingly Runeblade packs a serious amount of spell-casting, exploring and sword fighting into this wrist-bound adventure.

With simplified RPG mechanics alongside plenty of magical content, Runeblade is perfect for 15 second blasts of monster slaying and rune finding. The game is free for now, though the developers have additional paid content lined up for the near future. 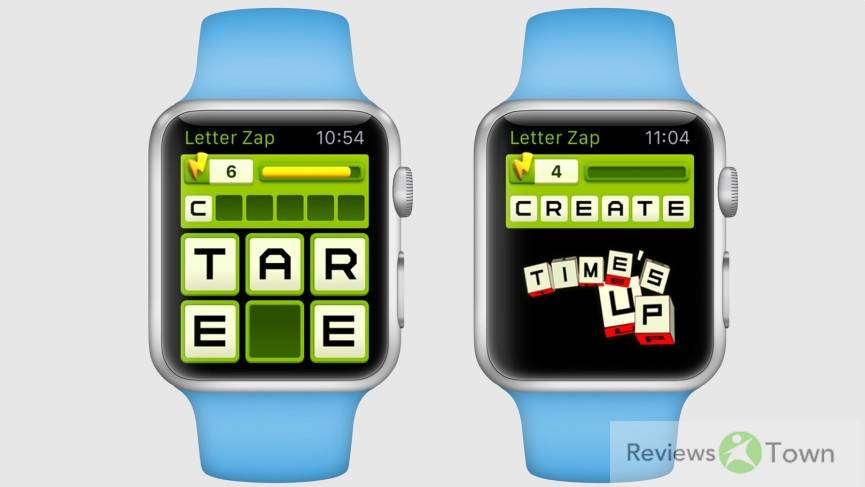 Whilst RPGs and in-depth text adventures might be impressive, sometimes games stand out because of their simplicity and stylish execution – and this is where Letter Zap excels. In just 30 seconds you are tasked with uncovering as many words a possible from a group of 6 letters – that’s it.

Whilst there’s nothing else to report on Letter Zap, this word game puzzler works great on the smaller screen and has the ever-lasting appeal of challenging yourself to get a higher score. 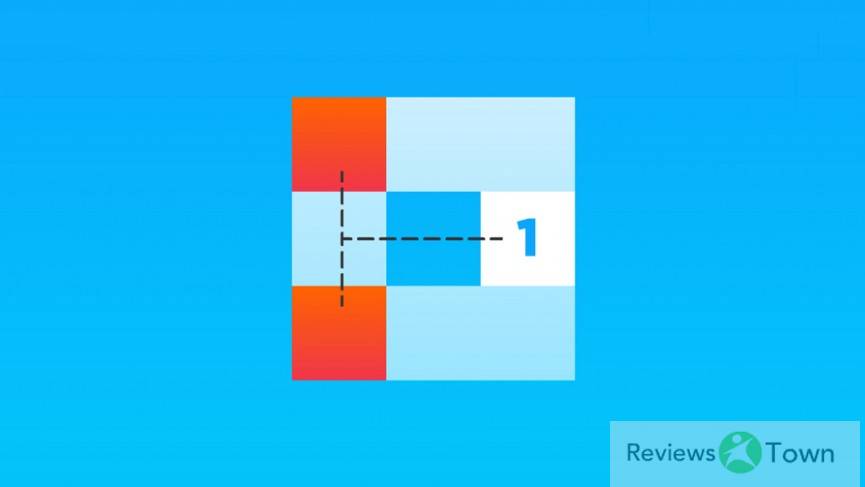 Another game which is as simple as it is addictive, BoxPop is an pattern-based puzzle game with over 40 levels and new daily puzzles that are based on following an L-shaped path around the playing board – much like the movement of a knight in a game of chess. Once you have landed on every space and cleared the board, you will earn rewards and medals and unlock larger grids and bigger challenges. It may seem simple, but BoxPop can become incredibly challenging. 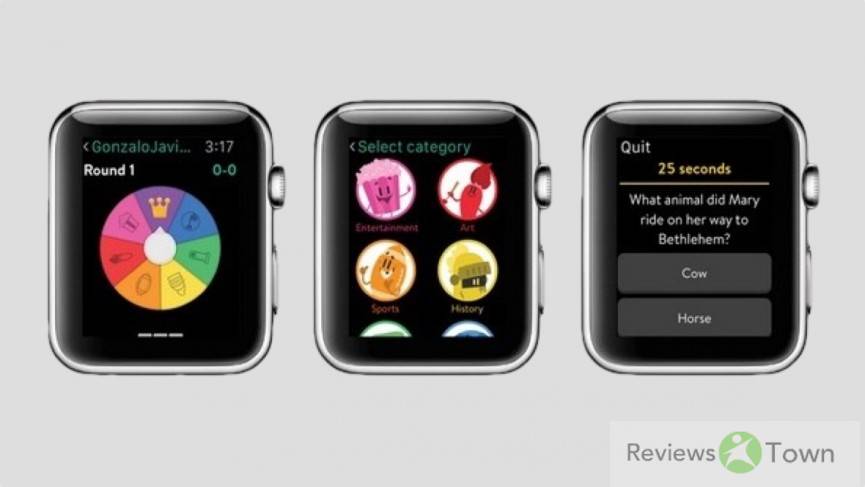 After experiencing wild success on Android and iOS, Trivia Crack has made its inevitable progression to the wrist to steal away even more of your time.

Gameplay is much like Trivial Pursuit but with the modern social twist of not actually having to be in the same room as your opponents. Packing in over 100,000 questions and with regular updates, you are tasked with answering questions across six categories denoted by unique characters, with the winner being the first to collect them all. 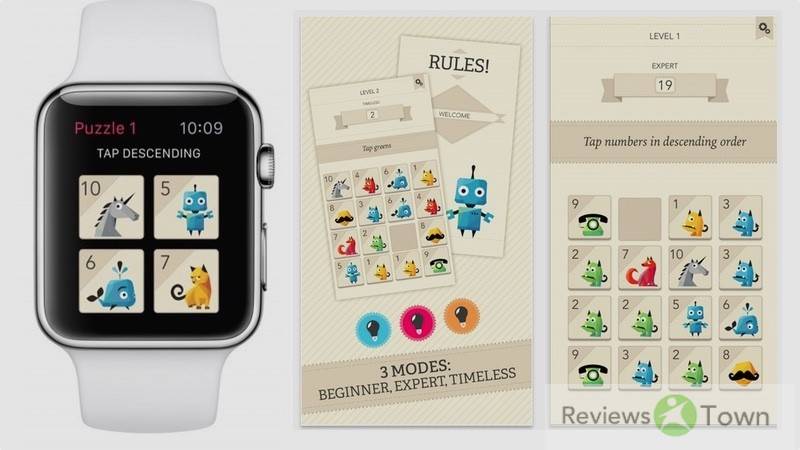 Like so many other games that are well suited to the itsy bitsy screen of the Apple Watch, Rules is a game of matching things, but with the twist of pre-set rules to follow in order to move onto the next puzzle. You might start by prodding numbers in an ascending order, followed by colour or character type. The art style is delightful, which – combined with the addictive gameplay – makes it easy to see why this is one of the most popular games on Apple Watch so far. 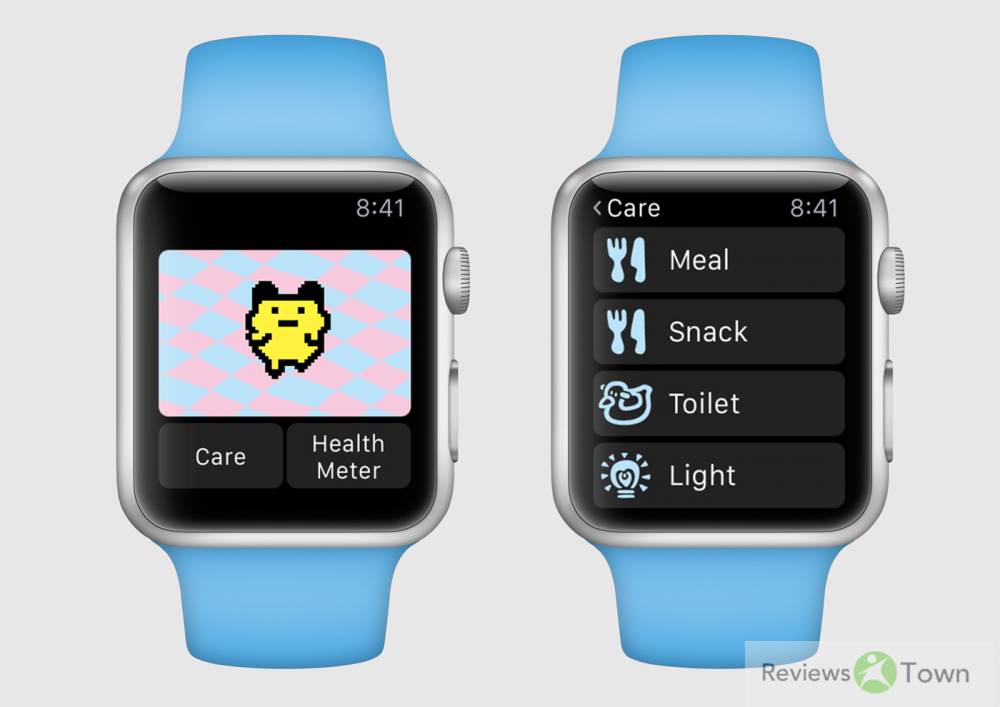 If you’re old enough to have had a Tamagotchi the first time round, the likelihood is you’ve got kids or at least a real pet to look after now. If you still long for a virtual pet to call your own, then the Apple Watch is the perfect platform on which to nurture your very own little critter.

It’s down to you to keep it happy, whether that be feeding it, playing with it or telling it to go to the toilet when nature calls. It might be a formula that has been rehashed a thousand times, but it has been given a new lease of life on the Apple Watch.

If Runeblade is simply too serious for your tastes then perhaps the delightfully weird Cupcake Dungeon (from the people who brought Pixel Miner to the Pebble smartwatch) might be more your style.

On your voyage throughout Cupcakia (yes, that’s right), you’ll come across terrifying pastries and doughnuts, which can be slain with increasingly violent weapons. It’s perfect for 5 – 15 second blasts that will make it look (to the uninitiated at least) like you are genuinely excited at the prospect of telling the time. 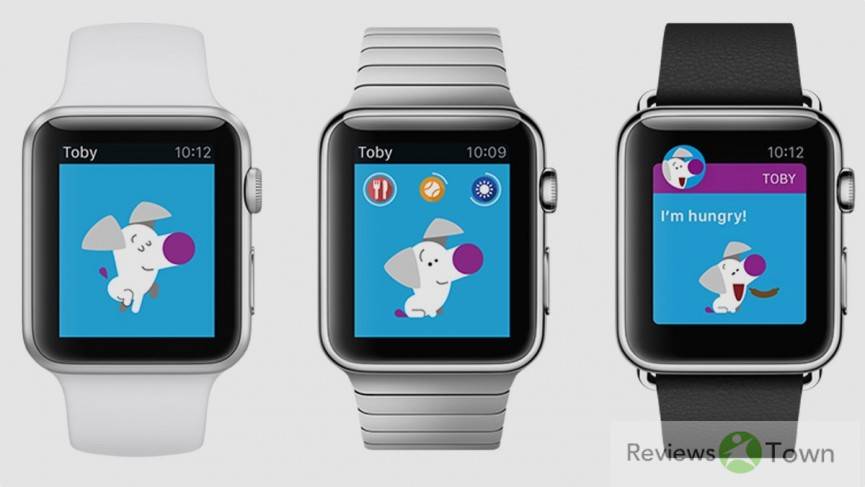 If you like the idea of your own virtual pet, but a Tamagotchi is simply too dated to take residence on your wrist, give Toby a whirl instead. This adorable cartoon pooch has bags of personality and gives back affection in spades.

Virtual pet staples of feeding, grooming and sleeping are displayed in a clean and fun interface, whilst Toby makes use of the Apple Watch’s unique inputs by recognising the difference between a gentle pet and a more forceful tap.