Hollywood studios have tried using VR to put people in movies for years. As I strapped on a proton pack, marched into a New York apartment building and faced off against demons, Slimer and the Stay Puft Marshmallow Man, I felt like they may finally be onto something – for those 12 minutes, I felt like an actual Ghostbuster.

The rebooted Ghostbusters film doesn’t release until 15 July, but Ghostbusters: Dimension is open to the public now. Dimension is a mixed reality add-on to a multi-story Ghostbusters exhibition with Madame Tussaud’s trademark wax statues of the cast and some fun, lifelike projections of your favorite ghosts from the films.

While the wax figures were Tussaud’s, The Void handled the hardware and ghostbusting VR experience which lets you explore the world from the movie as a ‘Ghostbuster intern.’

The Void, a Utah based enterprise, has already been knee deep in trying to create a virtual reality theme park complete with its own VR headset and experiences for the better part of a year now. The park has been generating lots of buzz and now with headsets like Oculus Rift and HTC Vive out on the market, people have had their own taste of VR making it easier to see the potential of a full-on mixed reality experience with The Void.

The Dimension press event with original Ghostbusters co-creator Ivan Reitman and the co-founders of The Void, gave me a chance to try out the innovative technology for myself. The Void swings for the fences with its ‘hyper reality’ experience, and while there were some minor flaws, they only stood out in contrast to the sheer fun and immersion of the overall experience.

I didn’t give the main exhibit more than a cursory glance, rushing through to beat my press peers to the front of the line for Dimension. I ended up in the second group with two journalists from CNET – Dimension sends in groups of three at a time. The waiting area had cutesy instructional videos telling you how to put on your gear and proper etiquette for not shooting your teammates (or crossing the streams!). 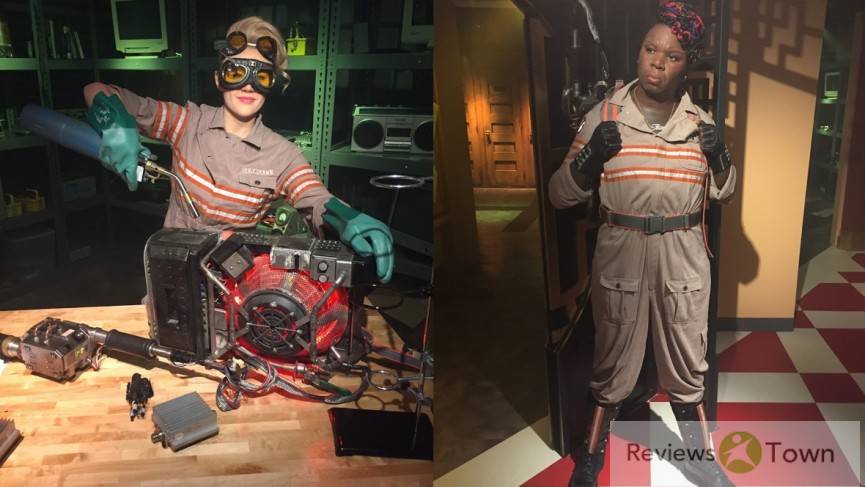 When our turn came, we walked into the setup room, where six wireless VR backpack rigs hung from hooks at waist height. They weigh 3.5 pounds and contain an Intel Core i7 processor typically found in desktop computers, an NVIDIA graphics card, a quick-swap battery pack, a vest with haptic feedback and the bulkiest VR headset I’ve ever worn. The ‘backtop,’ as The Void calls it, didn’t feel that heavy, but I can imagine younger or smaller fans feeling the weight.

The staff helped us put on our backtops and turned on our gun controllers, designed pretty convincingly like proton guns, and had us stand together in a small square near the entrance as they turned on our VR feed. 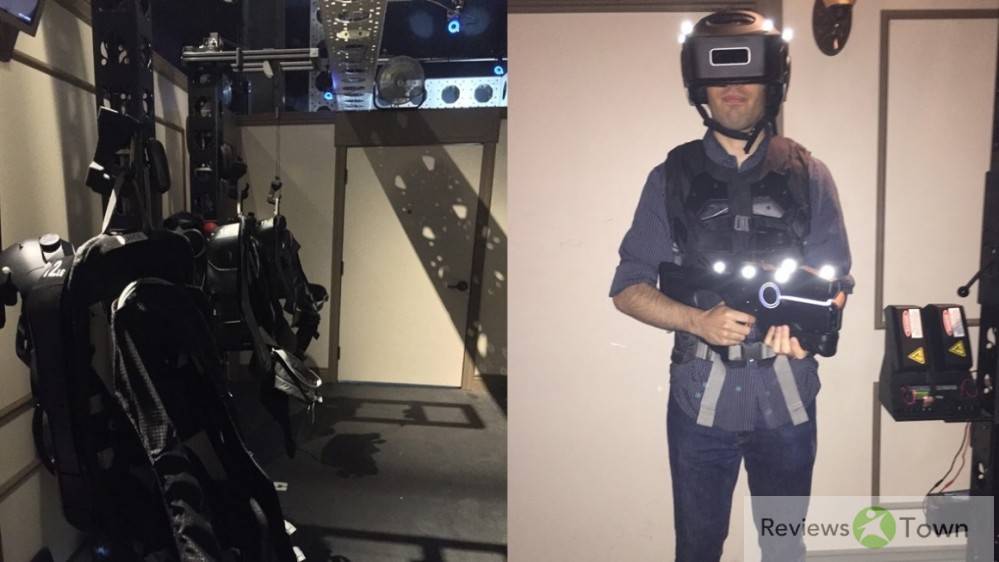 Our surroundings had transformed into the hallway of a New York apartment complex, and my two companions had morphed into ghostbuster avatars, complete with proton packs. I found it a little disappointing that Dimension, a tie-in for an all-female Ghostbusters film, has each player default as a generic white male avatar from your perspective. I myself was invisible, with my gun floating in front of me, though it tracked where I pointed it.

As the experience started (with Kristen Wiig narrating into our headphones), one teammate opened the entrance door to the experience in VR, and we physically marched into the next room in the installation. Inside the apartment, we could reach out and touch the walls, as the simulation was designed to perfectly match its surroundings. The wireless rigs, combined with the multiple room setup to traverse between, let me to lose myself in the experience – which is something I can’t really do with VR at home.

Pretty quickly, the ghosts come out in force, and your gun is unlocked. When you shoot a ghost, your proton ray wraps around them until they either dodge out of the way or disappear. Having played plenty of Wii and PS4 Move games where the motion controls can’t keep up with your movements, I can confidently say these controls were as close to perfect as we’ve seen so far. Aiming felt completely organic. 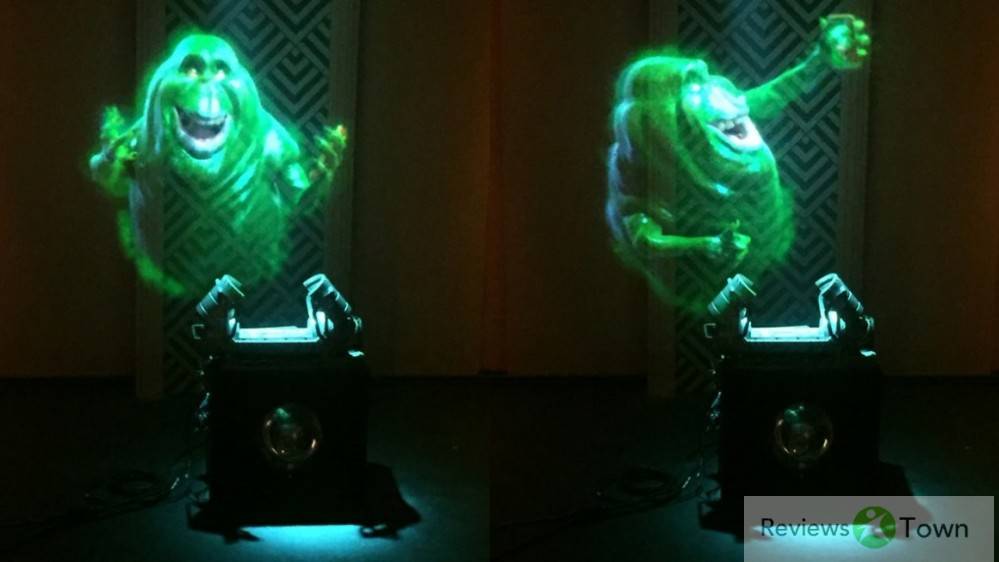 I had a blast taking down ghosts, but I had just as much fun interacting with my environment. When I missed a ghost, my rays would knock over ornaments, shatter dishes and leave burn marks in the furniture. Before the first wave of ghosts vanished, I ended up ignoring them and trying to cause as much collateral damage as possible. One ghost punished my inattention by flying through me a couple times, triggering haptic feedback that gave me the chills.

We progressed into the next hallway before stepping on an elevator – a room with a realistically vibrating floor, preserving the immersion. Our proton packs locked, we watched helplessly as fan-favorite Slimer charged and blasted us, triggering warm mist to blast us in the face while our avatars turned slimy. Then a very intimidating little ghost joined us for the remained of the ride, making the tone of the game a little scarier than before. 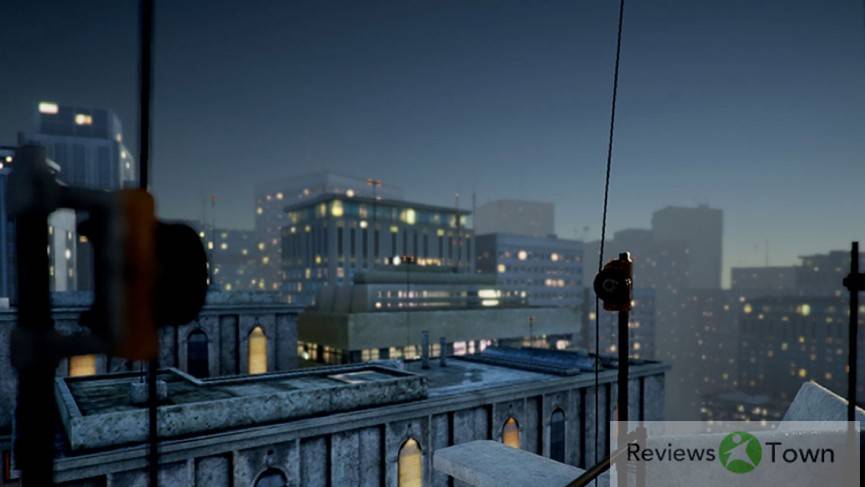 After the elevator ride we came to a catwalk where demons flew above New York City. A green pillar of light enveloped the Empire State Building in the distance. James Jensen, The Void’s chief visionary officer, previously told me that Sony had some input on the game’s plot and setting, so this could be foreshadowing for the film. When I hung back for a second at the doorway to look around, a staff member, that had apparently been shadowing us, shoved me forward so I couldn’t really observe more.

I learned later that the Dimension staff has two to three groups out in the installation at a time, and they had to make sure everyone kept moving so no one runs into another group. But that shove definitely broke the immersion for a few minutes.

Our next room was the mini-boss fight, with a very angry ghost throwing chairs and sending minions at us until we eventually captured her as a team. Anytime I failed to destroy an object before it hit me (or when my teammates accidentally shot me) shocks of haptic feedback punished me, adding some stakes to an essentially on-rails experience.

The good and the bad of ghostbustin’

No shade to my CNET teammates, but I wish I’d had the chance to enjoy the experience with people I knew. Where most VR games keep you isolated, Dimension makes you feel like part of a team: you can clearly communicate with one another through a microphone on your rig, and working together to take down ghosts captures them faster. It would have added to the experience to be able to talk ghost-busting strategy with my friends…and to feel comfortable chiding them for blasting me instead of the ghosts.

In the end, we had a surprise visit from the Stay Puft Marshmallow Man and got the chance to play out the ending of the original film (fans will know exactly what that means). Then we walked back towards the setup room, where I was tackled by a staff member so I wouldn’t walk too far. Considering the overall realism of the experience, I wonder why they couldn’t do a better job indicating where you’re supposed to go.

I also ended up with a splitting headache, though whether from the tight headgear or the hundreds of fast-moving ghosts causing simulation sickness, I couldn’t say.

I was lucky to get into Dimension early; many of my press peers still hadn’t gotten a chance a couple hours in. A staff member told me they wouldn’t be able to get more than 400 people through the experience a day. That’s only 40 or so people per hour, so anticipate very long lines before you get in to bust some ghosts.

Admittance to the Ghostbusters Experience is included in your general admission ($25), but to try out Ghostbusters: Dimension you have to pay for a $50 bundle. Assuming you’re only really interested in the VR experience, you’re essentially paying over $4 a minute for the privilege. Speaking as someone who really enjoyed it, that’s a premium price for something that you won’t be able to replay at home. The experience apparently has branching endings and hidden surprises based on your performance, but only the most diehard of fans will pay to go more than once.

The future of hyper reality with The Void

Interacting with your environment while invisible did feel disorienting, however Jensen mentioned plans to incorporate full-body tracking, or at least hand tracking via Leap Motion, as they continue to upgrade the experience. That would definitely be a step forward for a program that otherwise felt perfectly immersive.

The Void plans on opening a huge installation in its home state of Utah, where it will house eight different VR experiences in physical sets that are all larger than Ghostbusters VR, according to Jensen.

Hyper reality, which uses virtual reality to transform a pre-mapped setting, requires lots of dedicated real estate and expensive, customized hardware to work – hence the high price tag – but it transcends the type of experience you can get at home in a confined space. Jensen says The Void also hopes that Ghostbusters will just be the first in a long line of licensed games, and that they plan on creating more individual installations throughout the country.

Overall, Ghostbusters: Dimension is the most distinctive and immersive VR experience I’ve had the pleasure to play, and I’ll be keeping an eye out in the future to see what else The Void releases.